The Blacksmith Shop was along a busy teamster route. It was adjoining a wagon shop where the wagons were “ironed” and “tires” added to the wagon wheels. Horses were shod and tools were made. William Little, Jr. came to Loysburg from Liberty Township in 1850 and took over the existing blacksmith stand. He was also able to acquire property and build a large brick home across the road. 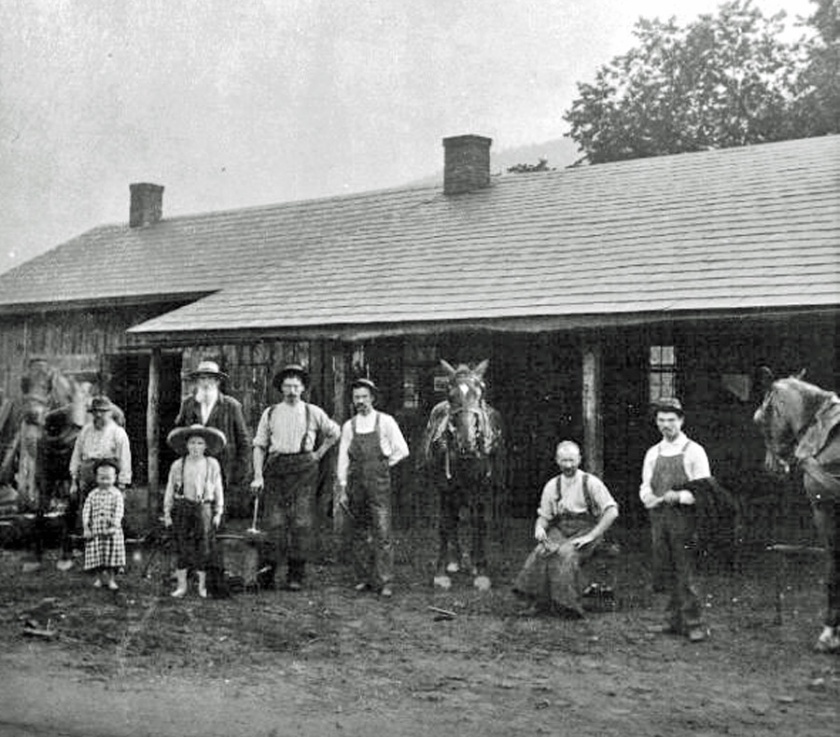 This photo of the shop is dated 1888 and shows the blacksmith, James Patton Little, seated here. It looks like a couple customers also got into the photograph. The child on the left that appears to be in a dress is my grandfather, Charles Edgar Little. His older brother Harry is in the broad-brimmed hat. Day care in the 1880’s.

C.W. Karns describes the business in his book, “Sketches of Morrisons Cove” – published 1933:

William Little and Henry Burket followed George Miller as blacksmith at the same stand. Joseph Manning, an Englishman, was for many years their wagonmaker. He was a good wagonmaker and made many heavy wagons which were ironed by William Little and Henry Burkert. He built the famous wagon now owned by Frank Brumbaugh which was shown at the Martinsville centennial and a picture of which is shown on page 21 of this book. Such a wagon cost in those days at least $125 and the Conestoga bed about the same amount. William Little retired from active service at his trade, and his son James P. Little, conducted the shop for forty years or more. Leroy Stotler is now the efficient mechanic in this long used and important plant.

Across the road stood the house that J.P.’s father built for him. It stood next to William’s house. Here is a photo from about the same time as the photo above. The blacksmith is wearing his protective leather apron, while his wife Belle (Fisher) stands behind the fence holding baby William Ross, and his children Edgar, Harry, and Clara posing beside them. Their younger sister Elsie had not yet been born.

Elsie ended up inheriting the house. I remember visiting her there  as a boy in her later years. This home has stayed in the family in that after Elsie’s passing, Gaylord Little and family purchased the home. They reside there to this day while their children and grandchildren live nearby.